“Trauma” is one of those words about whose meaning there is no consensus; or, to use a Lacanian term, it functions as a point de capiton—that is to say, a word that everyone uses, yet it has no fixed meaning on which everyone agrees—and the constant usage of the word generates the illusion that everyone refers to the same phenomenon whenever the word “trauma” is mentioned. Not only has the general public’s usage of the word nothing to do with how the word is used in psychoanalytic circles, but every psychoanalytic tradition has its own unique understanding of “trauma.” The aim of this article is to show what role trauma plays in Lacanian psychoanalysis.

Psychoanalytic thought defines itself in very different terms, in terms of traumas and their persistence. —Lacan, 1992, p. 10

The Freudian Definition of Trauma

Let’s start by asking, “What is trauma?” The classic definition of the phenomenon can be found in Freud’s works; and we could say that Lacan, as a Freudian, would have no general objection to Freud’s following definition of “trauma”:

We describe as ‘traumatic’ any excitations from outside which are powerful enough to break through the protective shield. It seems to me that the concept of trauma necessarily implies a connection of this kind with a breach in an otherwise efficacious barrier against stimuli. Such an event as an external trauma is bound to provoke a disturbance on a large scale in the functioning of the organism’s energy and to set in motion every possible defensive measure (Freud, 1961, p. 23).

Freud’s definition appeals to the common sense, so much so that it makes sense even to the layman. And in general, when reading Lacan, we should always keep Freud’s definition in mind; however, it needs to be said that Lacan, as usual, adds his own unique twists and turns to Freud’s simple definition.

Given Lacan’s reliance on Freud, it is important to point out the relation between neurosis and trauma in Freudian psychoanalysis before we go any further. Freud claims that “neurosis could […] be equated with a traumatic illness and would come about owing to inability to deal with an experience whose affective colouring was excessively powerful” (Freud, 1963, p. 275). If we accept the Lacanian assumption that there are no “normal” people, and that those whom we call normal are in fact neurotic, then it follows that everyone has their own trauma. This last point is crucial since according to Lacan, our traumas make us who we are. The idea that there is an essential substance which outlines our identity (or personality) is not foreign to Western thought; for Lacan, this essential substance is the traumatic kernel that each person possesses.

An example from popular culture may help drive the point home: in the TV series Westworld, we find an excellent Lacanian instance of how traumas make us human; consider the following conversation between Bernard and Ford: 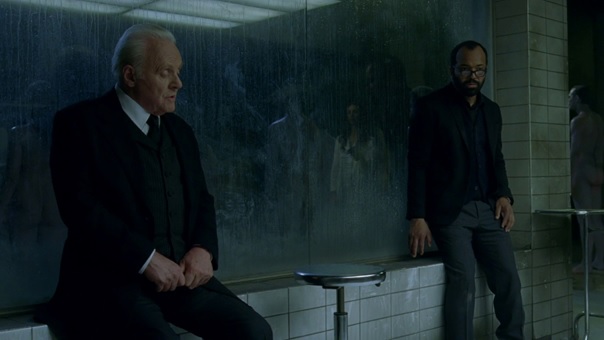 This is textbook Lacanian psychoanalysis! It is as if Lacan himself had written the script. We need to keep two crucial points in mind when reading this dialogue: firstly, trauma is precisely the mentioned cornerstone that defines each person’s identity; secondly, the words which are used to describe repetitive and circular motions—italicised in the text above—refer to the circular motion of the Trieb [drive] around an objet a. To push my argument further, it could even be argued that in the above dialogue, the word “thing” is not without significance: for Lacan, the Thing [la chose, or das Ding], just like objet a, is positioned beyond the Symbolic. As a matter of fact, the two terms are not unrelated: in Lacan’s seminars, the concept “das Ding” gradually develops into the concept “objet petit a.”

In his Four Fundamental Concepts of Psychoanalysis, Lacan takes a Kierkegaardian approach to tell us what trauma is. For Kierkegaard, Wiederholung [repetition] and Erinnerung [recollection] are two sides of the same coin: “Repetition and recollection are the same movement, except in opposite directions, for what is recollected has been, is repeated backward” (Kierkegaard, 1983, p. 131). Lacan agrees that these two concepts are related, but only to a certain extent: the limit which Lacan sets for this backward repetition is the Real. In other words, the patient can recollect his past minus the traumatic events. The traumatic events are unsymbolised for the subject; therefore, the subject cannot possibly recall those events; no matter how hard the subject might try, they would not overcome the void created by the trauma they have undergone. Viewed from this perspective, Lacan’s approach might not seem strictly Freudian; nevertheless, Freud had understood the limits of recollection despite claiming that “hysterical symptoms can be resolved if, starting from them, we are able to find the path back to the memory of a traumatic experience” (Freud, 1962, p. 195). Consider the following passage:

“It is true that in the earliest days of analytic technique we took an intellectualist view of the situation. We set a high value on the patient’s knowledge of what he had forgotten, and in this we made hardly any distinction between our knowledge of it and his. We thought it a special piece of good luck if we were able to obtain information about the forgotten childhood trauma from other sources—for instance, from parents or nurses or the seducer himself—as in some cases it was possible to do; and we hastened to convey the information and the proofs of its correctness to the patient, in the certain expectation of thus bringing the neurosis and the treatment to a rapid end (Freud, 1958, p. 141).

Here, we see strong similarities between the two thinkers. Freud had realised that secondary accounts of a traumatic event are far more reliable than the patient’s own account of the event. In fact, if the patient did “recall” something, it would be nothing more than a fantasy woven by the patient himself—a case of false memory. This is where the repetitive motion of the Trieb around the object a comes into play, for this repetitive motion is directly related to trauma. Fantasy is created by the repetitive motion of the Trieb around the objet a: when some (traumatic) event disrupts the symbolic order, a void gets formed in the Symbolic; this void is better known as objet a, and trauma is the disruptive event during which “the [objet] a is isolated by the Other and it is constituted as a remainder in the subject’s relation to the Other” (Lacan, 2014, p. 114). Thus, fantasy is created around a meaningless void, and its function is to produce the illusion of coherence; as a result, the traumatic event is perceived by the subject as something compatible with the rest of the subject’s symbolic universe.

“The place of the real […] stretches from the trauma to the phantasy” (1998, p. 60), and “phantasy is never anything more than the screen that conceals something quite primary, something determinant in the function of repetition” (Lacan, 1998, p. 60).

The Trauma of Birth

In the TV series Westworld, Bernard was given a traumatic event to make him more humanlike, but you need not worry if your life is less traumatic than Bernard’s—that doesn’t make you less human than an android. According to Lacan, there is one essential and common trauma that we all share: in his Seminar X, Lacan goes so far as to suggest that getting born is a traumatic experience—he calls this “le trauma de la naissance” [the trauma of birth]. We all share this common trauma, because we all emerge into the same “Other environment.”

The trauma of birth might make us human on a fundamental level, but it doesn’t explain why we differ as individuals. If we want to know what makes us unique as individuals, we need to take into consideration the traumas people undergo after birth.